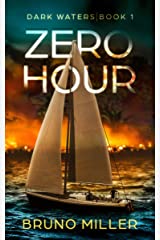 The hardest thing and the right thing are often the same.

Spencer Hayes, along with his girlfriend, Kate, and their dog, Finn, enjoy a life most people only dream about. Living aboard their thirty-one foot sailboat, Restless, they make the most of all that paradise has to offer. But that changes in the blink of an eye when EMPs strike the east coast of the United States.

Spencer quickly finds himself struggling to survive as the once laid back little town of Marathon in the Florida Keys is thrust into chaos and destruction. To complicate matters further, Kate is out of town visiting her parents in Stuart, Florida when the nuclear attack disables the grid, leaving Spencer with some tough choices to make.

His prior military service gives Spencer an overwhelming sense of duty to his community. But the responsibility he feels to help his fellow man clashes with his desire to reunite with Kate in a world turned upside down.

As humanity unravels, desperation becomes the new normal, adding to the seemingly insurmountable odds he and Finn must overcome in order to survive. Spencer is forced to make decisions he may regret. Only time will tell if the hard thing was also the right thing