What would you do if the grid went dark?

Vince Walker is looking forward to the beginning of the summer and a visit from his son Cy. But while picking up his son at the Indianapolis airport, the country is thrust into nuclear warfare with the detonation of multiple EMPs.

With fires burning out of control and the loss of the electrical grid, the entire country is thrown into chaos. Vince and his son, Cy, are forced to fight for their lives and escape the city as the world they once knew crumbles around them.

As they try to return to their hometown of Cloverdale, Indiana, or what’s left of it, they struggle to accept their new environment. Forced to come to terms with the harsh reality of the nuclear attack, they press on through what is quickly becoming a post apocalyptic wasteland.

Challenged with the absence of utilities and emergency services, they must save who and what they can before it’s too late.

Vince Walker and the remaining survivors from the town of Cloverdale, Indiana continue to come to terms with their new reality. Accepting the fact that the country has been thrust into nuclear war with an unknown enemy means they must forget their former lives and forge ahead.

The affects of the EMP blasts have left the survivors with no utilities, and no communication with the world outside of their once sleepy little town. A power surge also resulted in widespread fires, destroying most buildings and homes, leaving few resources intact.

The challenge of living is made even tougher by a roving gang of looters that will stop at nothing short of killing Vince and his crew in order to take what few supplies remain.

Can they outlast their enemies? Or will the fight for survival become their last stand? 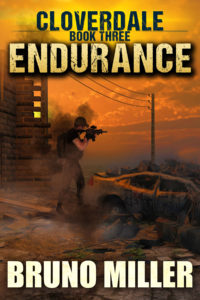 Would you fight for the ones you love?

The struggle for survival in Cloverdale continues as Vince Walker and a small group of survivors find that nothing comes easy in the post-apocalyptic ruins of what was once their town.

With a lack of emergency services and modern day conveniences, the reality of their situation forces them to rely on each other and become self-sufficient. Each new day brings with it a unique set of challenges that the group must rise above and conquer to eke out an existence.

Food, water and shelter aren’t their only concerns, though. They must also defend themselves against an outlaw gang of looters determined to take control of the few resources that remain and kill anyone who gets in their way.

Will the survivors of Cloverdale stay united? Or will temptation divide them? How many will succumb to the evil that lurks in the shadows just beyond the town limits? 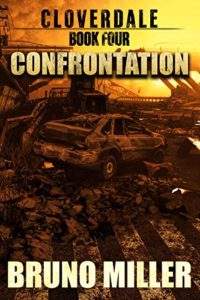 The survivors of Cloverdale, Indiana band together in an effort to scratch out an existence among the charred remains of their town.With Vince Walker as their reluctant leader, the small group struggles to rebuild what they can while striving to maintaining their humanity.

Each fresh sunrise presents them with the opportunity for redemption, along with the chance of failure. Nothing in this new world comes easy and teamwork becomes more important than ever.

As new people begin to show up in Cloverdale their group grows in size. Some of the additions are welcome assets, but others are not. Trust is a hard won commodity.

Vince knows there are some tough decisions ahead for him and the others due to the limited resources of the town. But none of that will matter if they can’t hold out against a gang of looters with revenge on their minds. The survivors are about to have their resolve tested in ways they haven’t even imagined.